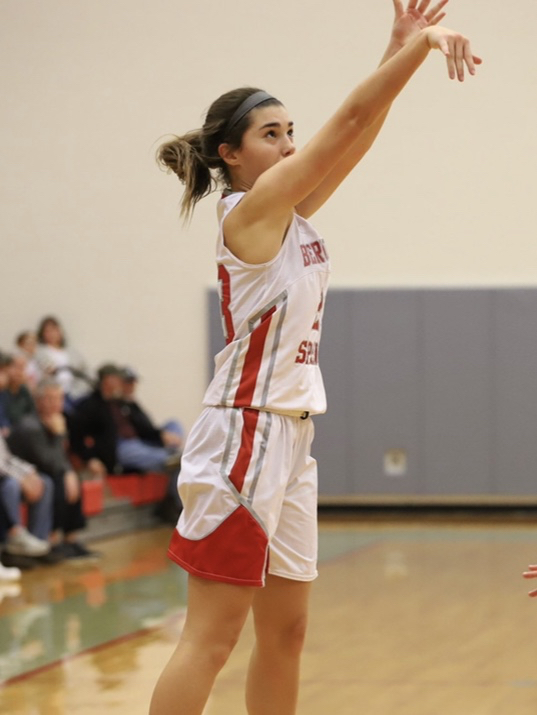 Bailey Oehmig has made her mark on Bermudian Springs High School Basketball starting every game in both her Freshman and Sophomore years, during which the team has earned two state tournament appearances.  During the 2019-20 season, Bailey demonstrated that her skills, desire and work ethic gave her not only a starting position and the most minutes on the court but earned her accolades from her team, coaches and competitors.  Bailey was chosen by her teammates and coaches as the team Most Valuable Player and by the PIAA York Adams Conference coaches as a Division III, 1st Team All Star.

On the offensive end of the court, Bailey was Bermudian’s second leading scorer with 354 points, bringing her two year total to 610pts. In addition to shooting 45% from inside the 3 point line and 30% behind it, Bailey can handle and distribute the ball, run the floor, facilitate teammates’ scoring while also creating her own opportunities. These skills give the option to play her at the 1, 2 or 3 guard position.

On the defensive end of the court, Bailey is even more impactful.  She led the team in steals with 84, brought down the second highest number of rebounds (124) and was always charged with defending the opponent’s most skilled offensive player.  With an exceptional basketball IQ, athletic ability and endurance level, Bailey was often able to prevent an opponent’s ability to score, facilitate offensive and/or control her own pace.

Beyond game statistics, Bailey is an unselfish, coachable player with a personality that brings a team together. Off the court, she is a multisport athlete also earning the MVP honors as a sophomore in soccer and excels in the classroom.