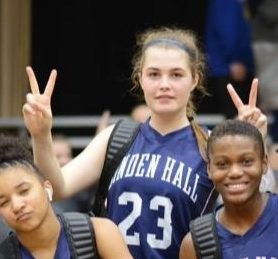 Anastasiya will be a fantastic addition to whichever program is lucky enough to scoop her up. In her first year playing basketball in the United States, she started every game for Linden Hall, the #16 ranked team in Pennsylvania by Maxpreps. Hard to guard on the perimeter, she’s a knock down shooter who also gets to the basket at will. When not on the wing, she’s taking advantage of her mismatch in the post, making her an ideal player for teams looking to utilize players offensively in a multitude of ways. Defensively, Anastasiya’s wingspan and build give her the ability to guard most positions. She’s incredibly tough and loves to pressure, trap, and dive for loose balls.

According to her high school coach, what makes Anastasiya particularly special is her heart. She moved to the U.S. less than a year ago, leaving behind everything and everyone familiar to her. Nevertheless, she never gives up and always works harder when things become difficult. This tenacity and resilience will serve her well as a college basketball player. She’s also an amazing teammate and an incredibly coachable player.   Her desire to be the best player and person she can be means she’ll show up every day and give you her all.